With the number of slots made and released on a yearly basis it’s quickly getting to the stage where there’s ‘nothing new under the sun’ as a certain Shakespeare put it a few centuries ago. 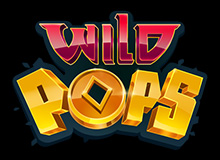 That is, until Wild Pops came along and made a complete mockery of that theory.

Part of the Yggdrasil Masters series and specifically made by Avatar UX, it’s done its best to take everything you thought you knew about how slots normally work and pretty much thrown all that into the bin.

For starters, the symbols don’t spin as such as they do on other games. Rather, they sort of appear out of nowhere when you hit the spin button. And at least here’s nothing strange about how you decide on your stake or how you can go into Autoplay mode and have the slot spin for you. That’s definitely a good thing.

The fun starts when you secure a win made up of three or more adjacent identical symbols. The first thing you’ll notice is that there are normally 486 ways to win but each win sees the symbols replaced by others, which in turn causes the reels to open up and expand, which has the knock-on effect of increasing the possible number of ways to win.

The more wins in a row you get, the more the reels expand, and the more ways there are to win, while the Multiplier keeps going up, as well.

Two extra things to take note of Cherry bombs act as Wilds and substitute for other symbols to help you win, and three wins in a row thanks to the cascading symbols feature earn you two extra random Wilds to help you secure additional pay-outs.

Finally, and typical of a slot like this, there are no free spins, Rather, there are extra lives up for grabs. Once the board/reels become 7×5 rather than their original dimensions thanks to a series of wins, you’ll get three extra lives that come into play when you have a non-winning spin. It’s a sort of insurance and will come in very handy indeed.

As for the name of the slot, no…we don’t know why it’s called that, either!