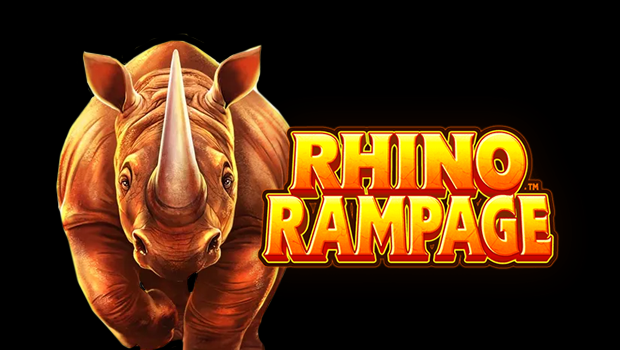 Rhinos have become quite a feature in slot games. And we can understand why. As one of the Big Five, they represent the unchecked power of nature. This version of the Rhino theme takes place in the African savannah and gives players the opportunity to win an impressive progressive jackpot.

Brought to you by Blueprint Gaming, Rhino Rampage is a 5×3, 25-payline progressive jackpot slot. Speaking of jackpots, the game features not one, but four amazing Jackpots.

Set against a majestic African sunset with plenty of realistic-looking furry friends, the mighty Rhino is the star of the show.

The Rhino has it all his own way in this game. It is the highest-paying symbol, as well as a stacked wild, substituting all symbols bar the bonus and scatter. The remaining animals are all high-paying symbols. Most of Africa’s greatest species are present: leopards, hyenas, warthogs and meerkats have all joined the party

During the base game of Rhino Rampage, you’ll be able to win 25,000 times your stake. But the magic really starts when the sun sets on the animal kingdom and you get your free spins. To activate your free spins, you’ll need to get three scatter symbols. You’ll find them on reels one, three and five.

In this round, the games’ adjacent reels become one 3×3 colossal reel and you’ll initially be rewarded with five free spins.

The music picks up-tempo, and no doubt your heart will start pumping as much as if you were being chased by an actual rhino. Well, maybe not.

From here you can trigger the Lightning Spins bonus and you’ll need to collect the moon symbol to enter this round. The scene turns to night and the moons come out to play.

This is where you can win the four jackpots and the aim here is to fill all reel positions with full moons.

Africa in the moonlight… what a magical place.