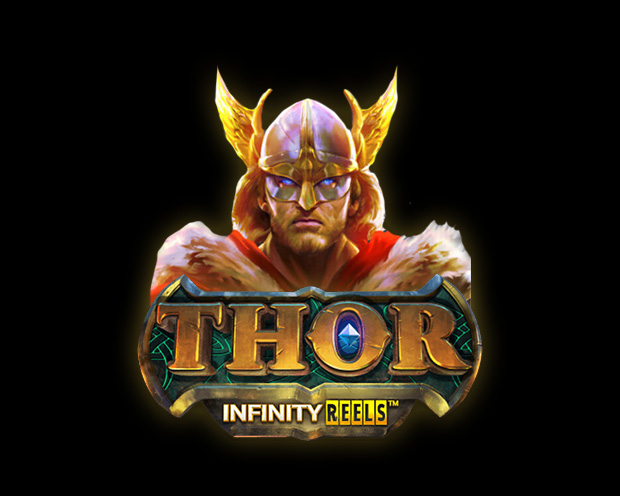 The theme of Thor and Norse Gods has been done before in the world of online slots.

The more experienced slots players out there can probably name four or five slots that have gone down the same path over the years. But this one might just be the pick of the lot.

When you first start playing you may be a little disappointed that the game only has three reels to it. But as we’ll see right now, three is the absolute minimum but there can be plenty more than that. Not quite the ‘infinite’ number the game advertises but quite a few more nonetheless!

Three identical symbols on adjacent winning paylines gets you a prize as per usual and Thor himself is taking centre stage here as the game’s Wild symbol, substituting for other symbols.

The first little extra to look out for is the Symbol Multiplier Feature. That means that after any win, an extra reel with new symbols will be added to the regular set of reels. If a symbol there improves what you already had, then yet another set of reels will be added and so on.

But with each set of extra reels that’s created, you’ll also see a Multiplier increase by 1x each time.

Manage to get new wins 12 times in a row and you’ll have banked the Infinity Bonus Feature, seeing you paid out to the tune of 888x your total stake.

An alternative way of getting a big payout is via the Jackpot Re-spins Feature. Triggered by getting six hammer symbols, you’ll get three re-spins on a set of reels solely containing blanks and hammers.

More hammers appearing get you more re-spins and at the end of them, all your hammers are given a Multiplier of between 1x and 100x. They’re all added up together and that’s what you’ll get, generally a hefty payout worthy of a Norse God!