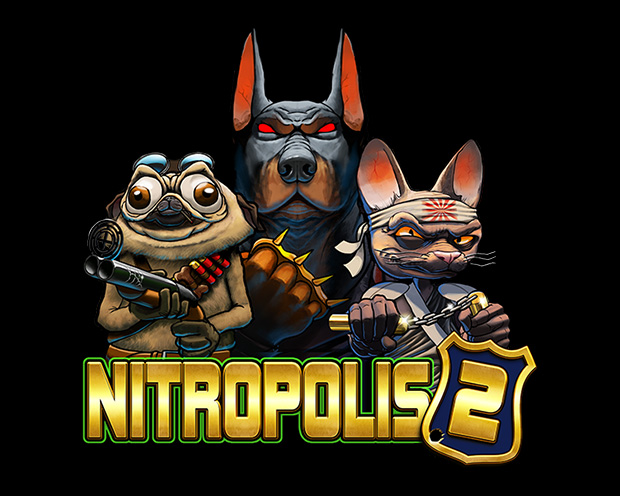 This is one of the weirdest and most wonderful slots that we’ve seen in some time and that’s just typical of the game’s makers, Elk Studios.

Nitropolis is, apparently, a city where four clans of animals- Dirty Dawgs, the Gritty Kitties, the Pug Thugs and Rouge Rats- fight it out to get access to green nitro to fuel their cars.

The first thing to say is that it’s played out on 6 reels and the second is that this is the definition of a highly volatile game, so don’t think that after a few hours of it you’re going to be pretty much where you started. You’re likely to be either significantly down, or significantly up!

The best way to make sure it’s up rather than down is to try to activate the free spins round. You’ll need 3-6 Scatters to get 10, 15, 20 or 25 free spins and the beauty of it all is that before it starts one symbol is randomly selected as scatter paying symbol. Get three of those on any three separate reels and you’re guaranteed a win.

During the free spins round, Nitro Reels are sticky.

But what are Nitro Reels? They cover two positions and may contain 4, 6, 8, 10 or 12 symbols which affect the number of win ways. Occasionally, the Nitro Reels spin again for a Second Chance.

The great thing about securing any sort of base game win is that it can easily lead to plenty more.

That’s thanks to the Winning Respins feature, which are somewhat similar to what in other slots are called cascading reels. Winning Respins means the symbols that formed a win spin again and if they in turn lead to another win, then guess what? Yeah, yet another Winning Respin is coming your way.

Get on a good run and that your bank will be significantly boosted in no time.