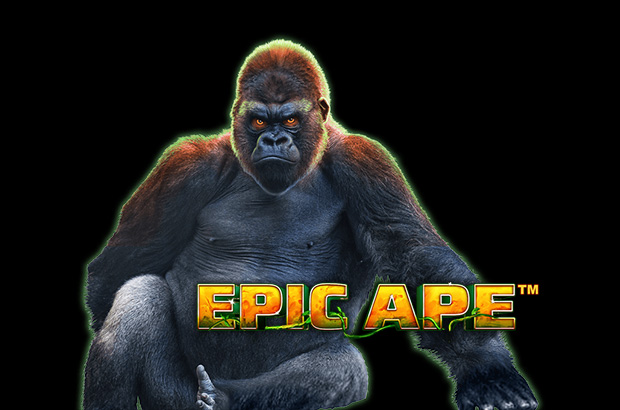 Epic in name, epic in nature, this is a slot that follows the well-trodden path of featuring wild animals. Playtech have a slot here that’s easy and unfussy to play but is also an unusually volatile slot.

If you need a reminder of what that means, it’s that this is a slot where you don’t necessarily get consistent small wins that keep you happy and make you feel that you’re slowly building towards a decent profit but rather, it’s a slot where you secure far less wins but they tend to really count when you do bank them.

But let’s start at the beginning.  It’s a 6×4 slot where the wild animals tend to be the higher-value symbols. So reptiles including the frog and chameleon are good to get, the big cats made up of the leopard and black panther are even better but where the best of all is…you guessed it…the Ape. Or the Epic Ape as the case may be. Get six Epic Apes on the reels and before you know it, you’re being paid out 300x your stake. Now that really would be epic.

Helping you along the way is the diamond symbol, which is the Wild. It will substitute for any other symbol, except for the Scatter, and before you ask what the Scatter does, we’ll tell you.

Represented by a symbol that says ‘Free Games’ on it, getting three of them will lead to what this game is really all about: the free spins round.

Apparently, you can get 100 free spins should you get six scatter symbols, but that’s about as rare as spotting an Ape in the aisles of your local supermarket.

A more realistic goal is to get three Scatter symbols, trigger 8 free spins and hope you get a slice of luck during those by securing wins with the help of the Wild symbol. Any of those will pay out at 2x, 3x or 5x more than usual, and it’s totally random which of those it is.